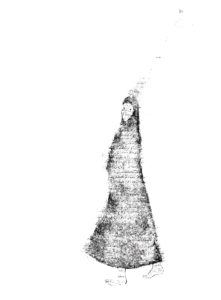 “Overwritten Scripts” is a set of prints I created on women’s rights with the intent to emphasize the inequality that exists based on socio-cultural norms rather than Islamic principles, which regard men and women equal in humanity.

Each print speaks of a specific right a woman deserves and they are a result of an extensive study of literature on women’s rights in Islamic countries and the Quranic pretexts.

The injustice towards women in Islamic countries has been in my mind for a while, resurfacing from time to time. Currently women are deprived of even the most basic human rights that were advocated by Islam. The fairness and justice emphasized in the Quran and practiced in the early days of Islam is altered by the scholars and rulers who elaborate, implement and enforce them.

At the beginning of Islam, women were given freedom to develop their individuality and personality. They participated effectively in public life, took part in prayers in mosques together with men, acted as imams, joined their colleagues in military expeditions, devoted themselves to the study of theology, traveled widely and moved freely, mixed with men with self-respect and dignity. With the death of the Prophet Muhammad and the transformation of the community into an empire the rights that were granted to them were taken away and they were confined to their homes and were prevented from participating in public life and were excluded from public worship in mosques. This situation became worse with the penetration of foreign ideas and customs. First pre-Islamic customs reappeared during the Abbasid period, then various mores infiltrated Islamic culture through conquered people which were assimilated as norms and associated with Islam. The Mesopotamian, Persian, the Hellenic, Christian and finally Islamic cultures each contributed practices that both controlled and diminished women. These norms persisted until the present day throughout the Muslim world.

Each print speaks of a specific right a woman deserves and they are a result of an extensive study of literature on women’s rights in Islamic countries and the Quranic pretexts.  From these prints I will create installations.

Each print on women’s rights included in this series are one of a kind and are manually printed on 22×30” paper. 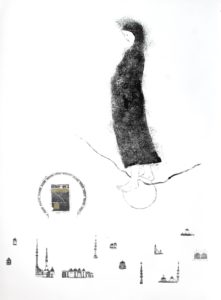 For this print, I was inspired by the drawing of Albrecht Dürer titled “Nemesis” (1502) which portrays the Goddess of Revenge and Divine Retribution Nemesis, balancing just barely on a globe. The landscape depicted below her is a small town south of Innsbruck in current day Austria.

For my print Nemesis, I created a woman in a chador balancing above the Ka’aba, the most sacred place in Islam located in the city of Mekka. The woman’s balance here relies on Islam which accepts the sacred role of women at home and outside and the current unfair conditions betrayed upon her. 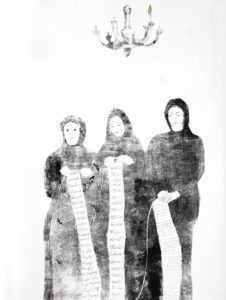 Love between man and woman has been widely celebrated in literature in many Islamic civilizations. In this print, I included two poems by the 12th century Persian poet Nizami; Khosrow and Shirin and Layla and Majnun and the 10th-century Persian poet Ayyuqi‘s epic Varqa u Gulshāh. All these stories are characterized by an unfulfillable longing. Single candle in the chandelier represents the presence of God.

There is no requirement in Quran of needing any other person‘s consent for a woman‘s choice of marriage partner. However, in many Islamic countries such as Guinea, the marriage negotiations take place amongst the parents, not the bride and groom even though there are independence laws which protect girls. 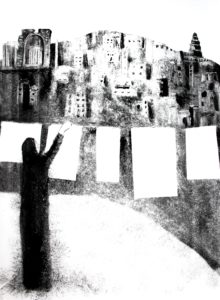 In the Hill Above Thousands of Years, an ancient Islamic town embraces the ancient Assyrian city of Nineveh, the Roman arch of triumph in Palmyra, Syria and the Abu Dulaf-Minaret-of-Samarra from the Abbasid Caliphate. In each of these civilizations that are thousands of years apart, women were restricted and reduced.

Veiling for example, already existed in countries that Arabs had contact with such as Syria and Palestine and also with Greeks, Romans, Jews and Assyrians where it was mostly connected with social status.  The Quran encourages modesty for the protection of the women. It only talks about how women should conduct themselves when they venture out of the family circle, go outside or abroad.

If only we feared madness
If only our lives could be disturbed by travel or shock
or the sadness of an impossible love
If only we could die like other people
Nazik Al-Malaika, Iraqi poet, (1923-2007)

Of a Single Soul 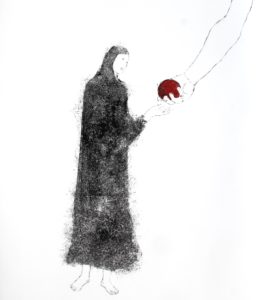 Islam denounced that Eve was the source of evil as the cause of original sin and the fall of humankind. According to Quran woman is not responsible for Adam’s first mistake. Both were equally wrong in disobeying God and both were forgiven.

Quran places identical spiritual and moral obligations on all individuals regardless of sex. It declares equalness in human biology and worth of labor. 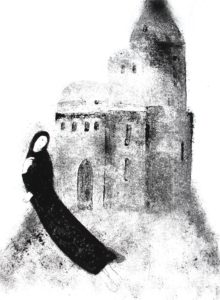 Today many women do not have access to mosques or have a designated section for them even though women attended public prayers in mosques during the Prophet’s lifetime. The women’s mosque access declined after the prophet’s death and completely abolished in the Abbasid period. 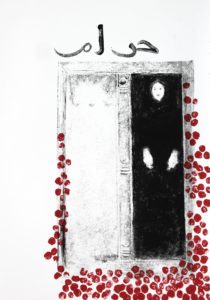 In Forbidden, I wanted portray women that are confined to their homes. Hareem from the word haram meaning sacred or forbidden referred to women’s apartments that were forbidden to all men except the family.  Most Saudi homes still have one entrance for men and another for women. There is no provision in the Quran that women should be physically restricted to the household. Arab women took part in the society just like the Jahilia women in Pre-Islamic cultures. Confinement of women was however observed before Islam in Mesopotamia, Iraq and Persia in addition to Byzantian culture. By time, Arabs adapted to the ways of the conquered people and the mores changed. 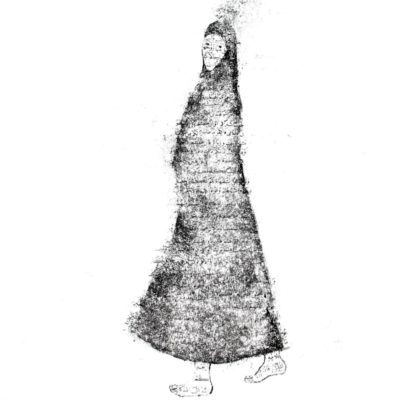 Quran asserts that man and woman were “created of a single soul”. I printed a fragment of Sūrat an-Nisā – a chapter of Quran entitled ‘Women’.

A caged bird stands on the grave of dreams
his shadow shouts on a nightmare scream
Maya Angelou, American poet, 1928-2014 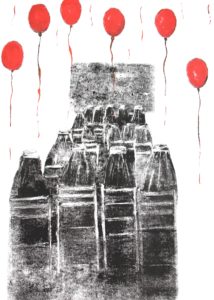 For Red Balloons I was inspired by the positive improvements in women’s education in some Islamic countries such as Afghanistan. The Quran strongly encourages the pursuit of knowledge and education for all Muslims regardless of gender. Both men and women are encouraged to acquire education as indicated by the Prophet as “from cradle to grave”. Unfortunately, highest illiteracy rates still exist in the Islamic world.

Flowers for Many Wifes 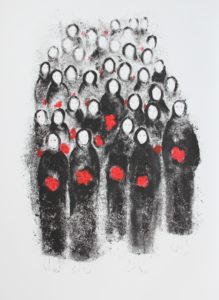 The issue of polygyny is one that is most subject to interpretation, and possibly speculation. The Quran permits up to four spouses because of the conditions of the day but also clearly states that one spouse is preferable. Polygyny was permissible only on the condition of equitable treatment of wives (If you fear you will not be just, then one, Quran 4:3). In many Islamic countries polygyny is still common. In Iran, for example, after the revolution, polygyny was again permitted under law. 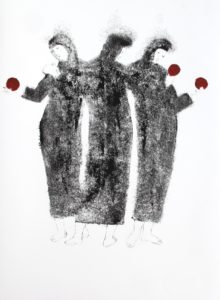 Here I am humbly referring to Raphael, one of my favorite artists of all times to once again present my wish for freedom for women. Per one interpretation, The Three Graces of Raphael represent Faith, Hope, and Charity. 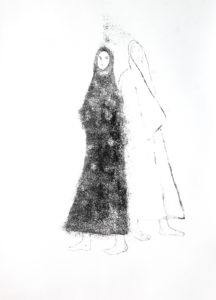 Leila Ahmed in her book Women and Gender in Islam presents some examples of how women in Arabic societies would contemplate with longings over the differences between themselves and the women of other societies. I tried to surmise how each would feel if their lifes were to cross at a point in time. 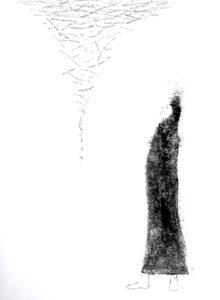 I printed sacred texts from the Hebrew Bible, New Testament manuscripts in Greek, and in Aramaic and Quran in Arabic in the sky.  These texts share the ancient declaration of the Oneness of the God with common ancestors. So one wonders why so much conflict? 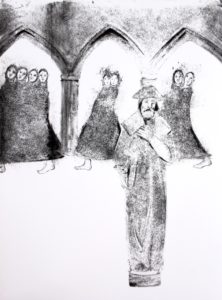 By adopting Islamic dress women had created legitimate public spaces for themselves. They were able to attend universities, under the shelter of their hijabs. With A Shelter Beneath, I am honoring the many Muslim women who persisted in intellectual pursuits despite their invisibility.

The women gazing at us represent these brave souls who hastened through the university courtyards with dignity and defiance. The sculpture in the front indicates the passing of time. I was inspired by a sculpture I saw in the Professor’s Garden at the the Jagiellonian University in Kraków this summer.

In this poem, it is she who “guards” her feminine status through seclusion (hijab) rather than being “the well-protected,” epithet of the respectable woman at the time. The ability to maintain hijab with pride while speaking her art invalidate the perception of veil as obstacle.