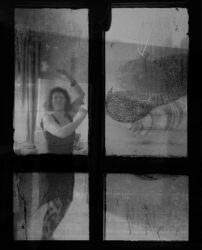 As I travel north and east and pass through towns with foggy windows each with its own happenings, I borrow stories. Happenings on an ordinary evening we witness from these windows allude to these stories.

lives strange as they are

beg me to borrow their tales

in strange towns I pass 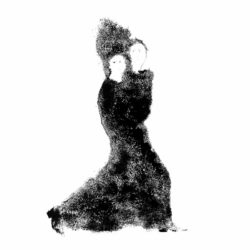 Allegories are about imaginary people with no definite time and place, not even a hidden meaning. In this film I am talking about how we lose consciousness of our separateness and passing time when we are having an intimate conversation. Only available as NFT. 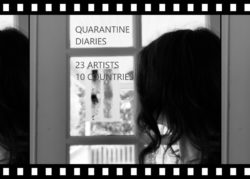 A short documentary film I made hoping that it will be a recording of these humbling times during the pandemic of 2020 so we can remember the perceived slowness that seems to create more considerate individuals. 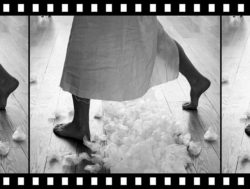 Among Flowers in Bloom

Videos made in isolation for our online performance, Among Flowers in Bloom — an interdisciplinary presentation of dance, classical music and art installation: Emily Bowman and David Crowe recorded their beautiful music inspired by the idea of the art installation which is walking lightly on earth. Julie Rothschild made a film of her dance as if she was moving around and within the imaginary art installation, responding to the artwork’s narrative in the space of her own studio. While combining these independent recordings, I imagined the music to which Julie was dancing to and merged visuals from my art installation with both the rhythm of the music and the dance. 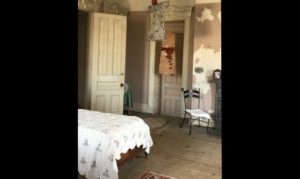 Clothes from the Past

I made a video of my installation “Clothes from the Past” after all the visitors left. I walked in each of the rooms displaying my exhibits. The creaking floors had a vague presence of previous lifes. The exhibits were at the 150 year old Dole Mansion near Chicago. Clothes from the Past Installation was installed at the Dole Mansion in Illinois in March 2017 as part of a solo exhibition series. Costumes of a period portray the status of the people, their traditions and the sophistication of a culture. I created garments similar to the ones worn by Turkish women and children in Anatolia and Europe from 17th to 19th centuries in a way to bring back and portray my culture. I referred to miniature paintings and literary sources to understand the styles of the time and studied the Ottoman textiles to create the embellishment on them. 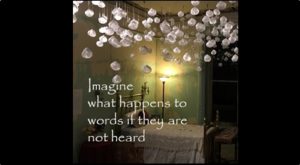 My exhibition “Words” is an invitation to listen to each other more. This is a movie of the installation and the audio. The imagery I always had for what happens to words if they are not heard was that they would be floating forever in the sky or inside rooms if they are not heard. The idea behind this exhibition was born from this imagery. I asked people who they are, how they define themselves and if there is anything different they would have wanted to be. These are questions no one possibly asked them before and they are not easy to answer. Their recorded responses with an intense earnestness are the audio part of this exhibition. They are played in an overlapping and echoing manner as if the words are coming from a monologue far away in time.  The installation consists of 400 transparent spheres made of transparent sheer fabric hung from the ceiling. They are the visual representation of the spoken but unheard words. 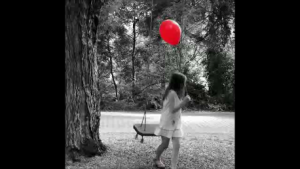 “Looking Back” is an autobiographical short movie which represents our stories in which we try to create coherent connections among our experiences that are supported by memory. It is created in Boulder and Istanbul and is displayed on the screen installed on a sculpture. The sculpture is a woman figure looking back. 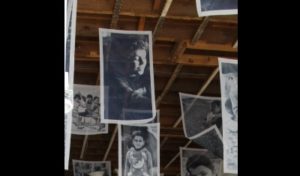 Floating Children is a short movie on my installation for the Children of Syria with which I intended to display the fragility of children in times of war. I collaborated with photojournalist Brian Rutter from Ireland. Black and white photographs of Syrian children printed on sheer fabric are hung from the ceiling in a way to seem like they are floating in the wind. I was inspired by a Japanese woodblock from 18th century of a woman whose handkerchief and concealed letters were carried away by a sudden wind. These children can also be carried away and disappear. The transparency emphasizes their fragility. To observe a child’s delicate innocence feels weightless even under the most difficult circumstances. The lightness of the material is to convey this feeling of lightness.