I am honored to share an art installation Poems in Silk of poetry and printmaking. The artwork is the result of a collaboration between myself, poet Anne Waldman, and engineer and artist Akın Köksal. As Anne Waldman says: “Working in collaboration is one of the most important practices for artists in these times. All kinds of new structures present themselves and new dimensions of space and time”.

With referrals to history, mythology, politics, and spirituality, Waldman’s poetry is intricate, intimate, and delightfully surprising. I had many late nights deciphering her poems and I am still not sure if I completely managed to do so. Then I made prints inspired by Gypsy Nun, trick o’death and crepescular. I created abstract forms that in my mind represented the powerful messages in her poems and printed them on diaphanous paper to give the feeling of impermanence. The installation has a deliberate simplicity and quietness so the viewers can have the space to contemplate Waldman’s wisdom without any distractions. I am grateful to Anne for her sharing her beautiful wisdom with me. 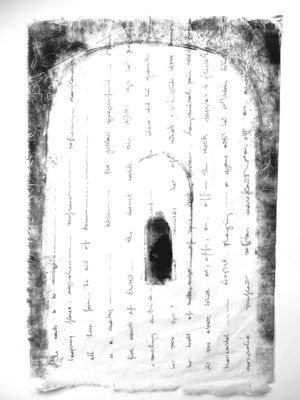 Gypsy Nun inspired by a poem by the 20th century Spanish poet Lorca, is about a young woman whose desires contradict her religious calling.  Through the visual details and the symbolic references Anne portrays, I visualized a room behind an isolating mashrabiya made of the poem itself.

Gypsy Nun
After Lorca
She wants to be weaving
imaginary flores:
magnolia
sunflower
saffron
moonflower
all these for
the end of time
In a nearby kitchen
5 yellow grapefruit
ripen
5 wounds of Christ
She doesn’t cackle
she gives up her pain
—something outside —
distant—ho —
where did her youth
her sex go?
What reminds her of what?
A white dress loosens
Her heart of herbs, sugar,
of spice
isn’t broken
Longitudinal pain recedes
further back
20 suns above blink on, off
on, off

She reverts tension to
flowers, horizontal
light playing
a game over her window
blind

magnolia
sunflower
saffron
moonflower
on, off
on
on 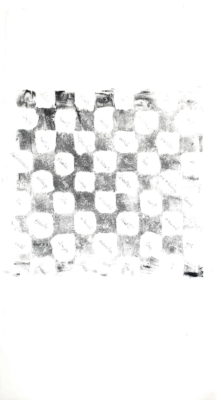 I created a print inspired by the talismanic shirts ornamented with text, magic squares, and other elements common to portable talismanic objects. In these shirts the use of letter magic provided a protective function through preserving the fleeting traces of human contact. Yucelen inspired by the poem trick o’death filled up each of the magic squares with Waldman’s words on the awakening powers of death forming a deliberate contrast for a wish for longer life to create Death is Awakening.

this is what to do

coins of ancient India on eyes

that shake the cosmos

as in opening a crypt

for death is awakening

they will guide you

with drops of amrita 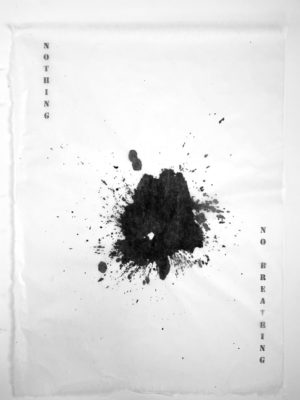 just nothing, no breathing is inpired by the following section of trick o’death:

she’s getting out of this

or just nothing, no breathing

The poems are used by permission of the author and the City of Lights, SF and Penguin Random House, NY.

The group exhibition PINKPROGRESSION: COLLABORATIONS which includes Poems in Silk is on display at the Arvada Center for the Arts and Humanities from July 2 – November 8, 2020.

You may make free reservations to see the exhibit at the following link.