Clarksville (2019) – From November 1st 2019 through January 31stth 2020, Customs House Museum is proud to present Belgin Yücelen: Semblance exhibit in our Jostons gallery. An installation consisting of sculptural garments created by Yücelen, Semblance draws on a range of cultural and historical references. The installation references not only the customs of the Turkish people from 17th to 19th centuries, but also alludes to miniature paintings, epic poems and women’s place in the society. Yücelen’s intent is to examine the ways of living during that period through their celebrations and ceremonies, sufferings and mournings, beliefs on how to protect themselves from the evil through the language of clothing.

The solo exhibition “Semblance” consists of sculptural garments portraying a past culture’s sophistication in a contemporary form.  Costumes of a period depict the status of the people, and their traditions. On an individual level, clothing is a visual metaphor for identity. This communication through the language of clothing epitomizes our modesty, social status, and addresses the themes of place, memory and family and opens up possibilities for disguise.

The Turkish-American artist Belgin Yucelen created these garments based on clothing worn by Turkish women and children in Anatolia and Europe from 17th to 19th centuries to bring back and portray her own culture. While creating this series, she had referred to miniature paintings and literary sources.  The dresses are made of copper, brass and stainless steel together with materials she had gathered from around the world. The techniques she had used to decorate the dresses are traditional embroidery techniques from Turkey and India, fabric manipulation techniques from Japan, calligraphy and gilding.

Belgin Yücelen is a Turkish-American artist creating sculptures, installations, movies and prints intending to enhance our imaginations and consciousness. At the powerful intersection of art and activism, she speaks out on behalf of children in war, women with no rights, and refugees. She also talks about current social and global issues such as the replacement of the traditional ways of communication by technology mediated human-to-human interaction and climate change.

She is the founder of the “House of Serein” which is a creative space designed for community use and studios for artists and freelancers in Boulder.

She is a recipient of grants including the 2019 Colorado Creative Industries Career Advancement Grant, 2018 Moon and Stars Project Grant; 2018 Executive Level Clark Hulings Fund, 2018 Kristal Martı award by KALID in Istanbul; and the 2017 Tending Space Fellowship for Artists by Hemera Foundation. She is also a National Sculpture Society elected member.  Her work was publicized in the PhotoPhore, Fort Morgan Times, Pittsburgh Articulate, The Tribune 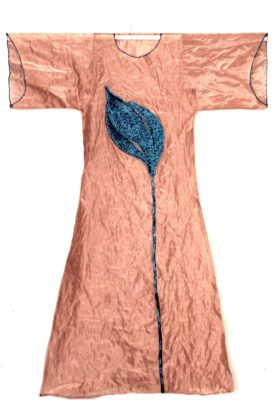 In Europe the tulip’s tale begins in Turkey from where during the 16th century European travelers brought back its news. In Holland between 1634 and 1637 single bulbs of certain types of tulips could be sold for sums equivalent to a town house in the best quarters of Amsterdam.  In the Ottoman Empire tulips were also greatly esteemed and were repeatedly used as a motif in architecture and crafts.

I chose the color turquoise which was widely used in Ottoman tiles and pottery to embellish this well admired flower and a bold design to emphasize its importance in times past. As a gemstone, turquoise was originally mined in Persia and traded along the Silk Route through Turkey to Europe. So the French named the stone and the color after the Turkish traders they came across. 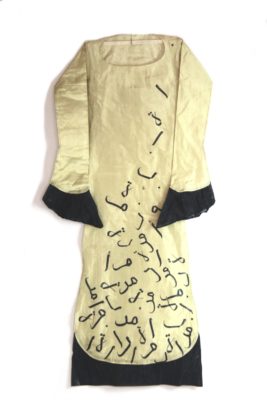 It was de rigueur for calligraphy to be used in clothing, prayer rugs and covers for the sarcophagi found in Ottoman tombs of important personages. Talismanic shirts decorated with invocations were used to protect the wearer against disease, enemies or any kind of evil.  Their cutting or decorations were performed at times favored by the Royal astronomer.

I wrote the letters of the word aimra’a meaning “woman” in Arabic in a way to seem like they are floating in the wind or falling to emphasize the delicate fragility of women in Islamic cultures. This dress is a hope to protect the women against inequality and injustice. 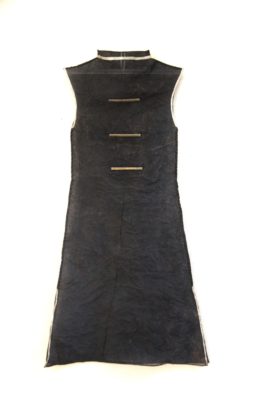 Robe with Colours of the Night and Gold Froggings

Throughout the Ottoman Empire, black mourning clothes, described by the Sultan Beyazid II as the “colours of the night” were worn to pay last respects to the deceased and to reflect the suffering of the soul. I added narrow bands of fabric called froggings which were commonly used to fasten kaftans. I chose the noble gold thread the use of which was forbidden in 1716 after a significant increase in its employment in fabrics.  Beyazid II ruled as the Sultan of the Ottoman Empire from 1481 to 1512.

This dress was inspired by a girl’s anteri made during the early 17th century. I used the bell shape of the skirt and modified the pattern by cutting the front, back and the sleeves as one piece. I added silk transparent spheres to convey the playfulness of a child. The spheres were made using a traditional Japanese technique. 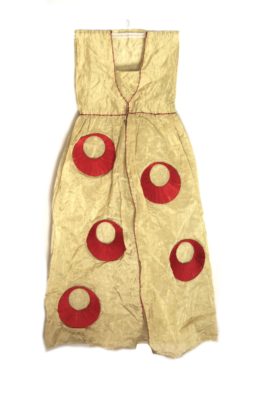 I included this dress which I adopted from a woman’s robe from the 18th century Persia because of the deep influences of Persian language, epic poems and miniature paintings on the Ottoman culture. The attractive body with a low décolleté into which a long skirt was gathered is also observed in European illustrations and descriptions of Persian woman.

The crescent motif appears in Turkish textiles dating from at least the 14th century. I used red dupioni silk from India and a technique I adopted from dival embroidery of thread over cardboard used in southeastern Turkey to create my crescents.